With all of the warmer weather, there has been a flurry of activity at our nest box sites. We have 5 total sites and 18 boxes to check. That means man power and our volunteers have been working hard. So where to begin with this update? I guess I will start with our successes so far.

Memorial Park has 7 boxes and the visitors have made some new homes. Two boxes have resident Black-capped Chickadees and have produced a total of 13 eggs; with an incubation period of approximately 13 days, we should be seeing some tiny chicks. We have two boxes claimed by Eastern Bluebirds, with eggs, and just found 3 newly hatched chicks in one of them. Most of the boxes at this site are near baseball fields, and we hope that the season’s activity won’t disrupt the nesting attempts.

Off in the quiet Beeman Creek Park, our two boxes have had the regular visitors, Bluebirds and House Wrens. In previous years the Wrens were a little territorial, but there is some distance between the two boxes, so we hope for amicable behavior. Our Bluebirds have 5 eggs that should be hatching soon.

Our Bike Path site has shown promise with some nesting activity, but nothing definitive yet. On my last check, I found some Poison Ivy growing by on of the boxes, so our volunteers will have to keep their eyes pealed when they make their nest box checks and wear appropriate footwear.

One of our new sites this year, the Peanut Line, has shown a small amount of promise. Of the three boxes, one has what looks like a Tree Swallow nest. Just like the Bluebirds, they are insectivores and a great addition to the boxes. The other two boxes have been empty, but that is better than being occupied by House Sparrows.

That brings me to our last site. The Clarence Library was chosen as an optimal site for setting up some boxes with the hopes we could install a camera in one to observe the nesting activity of Bluebirds, and have a feed showing inside the building for the public. There is evidence and sightings of Bluebirds in the area, but it may be a while before they use one of the nest boxes. House Sparrows have taken over both boxes and have become a nuisance. The building has cavities that they have used in previous years and they have claimed the area for themselves. Our boxes have just provided additional space for them. Have have plans to use Van Ert traps to humanely remove the  House Sparrows from the site, but so far they have thwarted most attempts.

I want to thank the staff of the library for being so helpful to our organization. They have been informative of any activity they happen to notice and are very tolerant of us hanging around, with binoculars, while we monitor the boxes. I always make sure I have my Clarence Bluebird Trail cards handy, in case someone asks what I am doing. 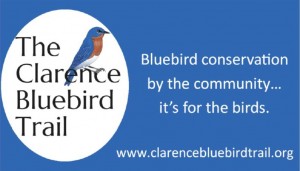 I expect this nesting season to only get busier, but am grateful for the success we have sown so far.

Flying by the Seats of Our Pants